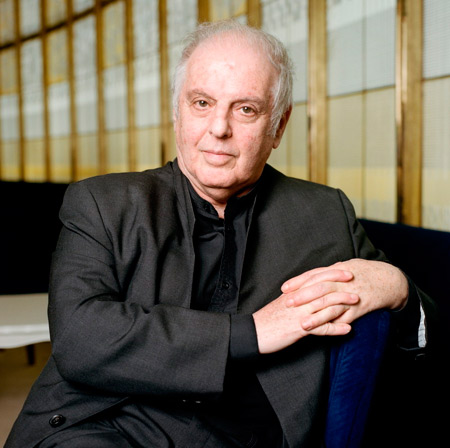 Daniel Barenboim was born in 1942 in Buenos Aires, where he gave his first public concert at the age of seven. In 1952 he moved to Israel with his parents. When he was 11 years old, he participated in Igor Markevitch’s conducting classes in Salzburg; he later went on to study harmony and composition with Nadia Boulanger in Paris until 1956. At the age of ten he made his solo debut as a pianist in Vienna and Rome, which was quickly followed by appearances in Paris, London, and New York. Since then, he has regularly toured Europe, the United States, South America, Asia, and Australia. As a lied accompanist, he has collaborated with some of the most acclaimed singers of our time, most notably Dietrich Fischer-Dieskau.

Since making his conducting debut in 1967 with London’s Philharmonia Orchestra, Maestro Barenboim has appeared with all major orchestras around the world. From 1975 to 1989 he was chief conductor of the Orchestre de Paris; from 1991 to 2006 he served as music director of the Chicago Symphony Orchestra, which at the end of his tenure named him honorary conductor. Between 2007 and 2014 he held leading positions at Milan’s Teatro alla Scala, including that of music director beginning in 2011. He conducted his first operatic performance in 1973 at the Edinburgh Festival. In 1981, he made his debut at the Bayreuth Festival, where he went on to appear every summer for almost two decades. In 1992 he was named general music director of the Staatsoper Unter den Linden; eight years later the Staatskapelle Berlin appointed him chief conductor for life. In opera and concert, Daniel Barenboim and the Staatskapelle have performed the great works and work cycles of the Classical, Romantic, and classic 20th-century repertoire in Berlin and on tour around the world. Most recently in 2018, they presented the complete symphonies of Brahms in Buenos Aires, Beijing, and Sydney. They also regularly perform the music of contemporary composers such as Elliott Carter, Wolfgang Rihm, Jörg Widmann, and Pierre Boulez. Their extraordinary artistic partnership is reflected in a number of acclaimed CD and DVD recordings. In 2016, Daniel Barenboim founded a trio with violinist Michael Barenboim and cellist Kian Soltani. The ensemble first appeared that same year at the Teatro Colón in Buenos Aires and in the 2017–18 season performed the complete piano trios of Beethoven, combined with contemporary works, at the Pierre Boulez Saal.

In 1999, Daniel Barenboim and Palestinian literary scholar Edward W. Said established the West-Eastern Divan Orchestra, which brings together young musicians from Israel, Palestine, and other countries of the Middle East and Northern Africa. The goal of the orchestra, which tours internationally every summer, is to open up a dialogue between the different cultures of the Middle East through the experience of playing music together. The project led to the founding of the Barenboim-Said Akademie in Berlin, which began operations in 2015 and since fall 2016 has been offering a four-year bachelor program in music and the humanities for students primarily from the Middle East. The academy is located in the former storage building of the Staatsoper and also houses the Pierre Boulez Saal. The Boulez Ensemble, which was founded by Daniel Barenboim, has its artistic home there.

Daniel Barenboim was awarded the Great Cross of Merit of the Federal Republic of Germany; he is also a Knight Commander of the British Empire, a Commandeur de la Légion d’Honneur, and a UN Messenger of Peace, and holds an honorary doctorate from the University of Oxford. His books include his autobiography, A Life in Music (1991, second edition 2002), Parallels and Paradoxes (with Edward W. Said, 2002), Everything Is Connected: The Power of Music (2008), Dialoghi su musica e teatro: Tristano e Isotta (with Patrice Chéreau, 2008), and La musica è un tutto: Etica ed estetica (2012).